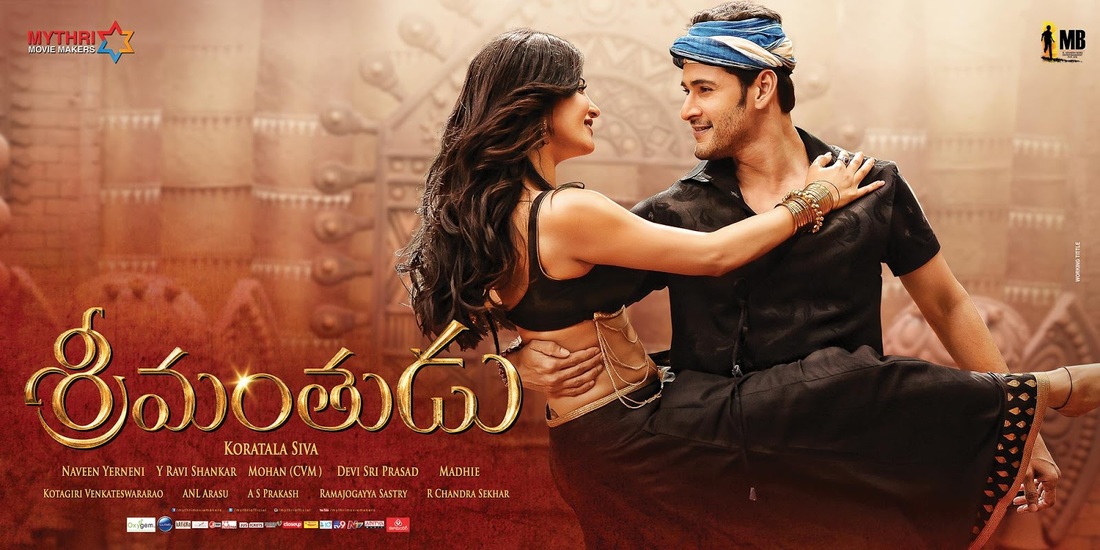 
It’s true that a film should have social responsibility. No other medium can deliver something to people in an impactful manner as a film does. But at the end, film is also a business. So, if something is said in a commercial way then it is useful in all the ways. One such attempt is “Srimanthudu”. Directed by “Koratala Siva” starring Mahesh Babu and Shruti Haasan, it is produced under “Mythri Movie Makers” banner by Naveen, Ravi Shankar and Mohan.

Harsha (Mahesh Babu) is the son of a billionaire Ravi Kanth (Jagapathi Babu) yet leads a normal life. Chaarusheela (Shruti Haasan)’s entry in his life lets him know who he actually is. Rest story deals with why Harsha adopts “Devarakota” village and what he has done for it.

Coming to the screenplay, director has dealt this subject in a more commercial manner with a normal introduction of lead character, later his family. One thing that surprised me was Harsha calls his mother (Sukanya) as “Amma” but he talks to his father like a stranger on a train. Yet I tried to digest this by thinking, maybe they are quite opposite poles.

Charuseela’s introduction to Harsha and Narayana Rao’s (Rajendra Prasad) to audience was quite normal. Only thing director has taken care of, was Mahesh who has his own style of heroism and appearance. This was projected well in the scene where Harsha talks to Union Minister Venkata Ratnam (Mukesh Rushi). The song “Jatha Kalise” was shot well projecting the friendship of lead characters. Mahesh and Sruthi’s chemistry worked out well on the screen.

As said above, Mahesh was handled in a sensible manner. As the title “Srimanthudu” refers a rich person, the director moulded his character in a classy manner. An example for this is the fight sequence in the marriage. Action choreographer “Anil Arasu” should be appreciated for this. “Charuseela” song came out well on screen. Here the art direction of “A.S.Prakash” and cinematography of “Madhie” were excellent and Mahesh looks more handsome and stylish than before. Thus, Mahesh’s stupendous characterization was satisfactory in the first half though screenplay was a bit boring.

Lowlandlies here. I didn’t know why the shots of Harsha travelling on a bicycle were shot using graphics. The graphics were of poor quality and more like animation.

The actual story starts in the second half. “Jaago Jaagore” song was a key sequence, shot well justifying the lyrics written by “Ramajogayya Sastry”. The scene where Mahesh explains the difference between lives in Urban and Rural areas came out well with meaningful dialogues. It’s the only scene where Rajendra Prasad’s character was respected.

After knowing the truth about his father, Harsha calls Ravi Kanth. In fact, this should be made a touching scene in the film. But the director made it a normal one. I expected here Harsha calls his father “Naanna” but got disappointed for not happening here. Yet I didn’t lose my hope on this.

The best part of the film was the fight sequence in “Mango Garden”. Heroism was elevated in a typical Mahesh’s style, a rich kid riding a bicycle with goons running behind. The conversation among protagonist and the antagonists and the following fight sequence was shot very well and entertained well. The director should be appreciated for applying this commercial formula in a right time in the subject. Anil Arasu’s action, Madhie’s cinematography and Mahesh’s mannerisms took this to a next level.

The above sequence was the last thing to be discussed in this film. Patience was tested very much with a dragged screenplay from this point. The antagonists should’ve been killed in the pre-climax fight sequence and the conversation between father and son should’ve been the climax. But the director dragged it more and failed to make the audience concentrate on film though Mahesh’s performance in the conversation was good.

Thus, the movie ended leaving my wish of Harsha calling Ravi Kanth “Naanna” as a WISH only.

Coming to characters and performances, Harsha is the only character which appears on the screen throughout the film. Mahesh’s performance in this role was stupendous and he proved that no other actor can do this apart from him. Shruti Haasan got a sensible role and her performance in the hospital scene in pre-climax was good. Her dance moments in songs were energetic. Ravi Kanth’s character is so important in this film and Jagapathi Babu playing it definitely makes an audience expect something from it. But the director revolved screenplay only around Harsha and neglected Jagapathi.Same happened with Rajendra Prasad. I felt, for that character, such capable actor is not needed. Even Rao Ramesh could’ve justified. Rahul Raveendran got a little importance yet over shaded by Mahesh. Sukanya was also wasted and it was felt she was opted just to say that small dialogue at the end. There should’ve been an emotional scene between mother and son at least. Vennala Kishore tried to entertain aliitle and Ali was a mere waste.

We should talk a little about antagonists. The characters of Mukesh Rushi and Sampath were nothing new. They are trendy roles. In other words, in Telugu cinema, only the actors playing antagonist roles are changing but not the “Roles”. Kota Srinivasa Rao and Sonu Sood are replaced by Mukesh Rushi and Sampath respectively. Nothing more is there to expect from the roles.

What should be learned from Srimanthudu?

An Telugu version of this piece can be found here
Tweet
COMMENTS :

​oakley sunglasses outlet http://shopping.cheapsunglasssales.com/ :
Hello, I enjoy reading all of your article. I like to write a little comment to support you.